Earlier this year I  flew over the birthplace of the Cox's Orange Pippin when my 'plane landed at Heathrow Airport. The runway stretches out towards the village of Colnbrook ending about 3 miles from its border. Hardly a buhcolic setting. How I wish I could travel back to the 19th century when the area was covered in miles of orchards. How beautiful, fragrant and above all, quiet it must have been.

In the early 1820's Richard Cox, a successful brewer, chose the village for his retirement home. He moved to a nice house on two acres of land and arranged his household to suit his needs. Three servants inside and three gardeners, which makes me think he was serious about growing things.

About 1825 Mr Cox planted two seeds from a Ribston Pippin which he is thought to have pollinated with a Blenheim Orange. The Ribston Pippin was first grown at Ribston Hall in Yorkshire from seeds sent from Normandy sometime between 1688 and 1709 depending on accounts.

The Orange Blenheim, as the story goes, was discovered around 1740 growing by a boundary wall at Blenheim Park by a Mr. Kempster of Woodstock. Originally called Kempster's Pippin the name was changed for marketing purposes to associate it with the Duke of Malbourough and his magnificent palace. Poor Mr Kempster, no doubt a true man of the soil, who recognised the potential and nutured the tree and deserves to be acknowledged.

Back to Mr Cox. Some years later, when the trees had fruited, one stood out for its wonderful flavour. In 1836 he supplied some grafts to R. Small & Son, the local nurseryman (then located behind Nursery Cottage on the south side of the High Street) who sold the first trees in 1840. Nursery Cottage is now a comfortable BandB, handy for accessing Heathrow Airport.

Charles Turner of the Royal Nurseries, Slough, started to promote them in 1850 and they quickly became the apple of choice for home gardeners and commercial growers.

Sadly, nothing is left of Mr Cox's garden. A block of flats (apartments) occupies the site. I've heard that around the back of the building, if you poke around a bit, the remnants of a summer house can be found. At least Mr Cox has his name attached to the apple and a park has been created nearby to honour their history. 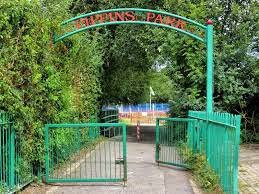 I'd love to know more about the other players in the story, who no doubt contributed greatly. Mr Kempster, the gardeners who worked for Mr Cox and at Ribston Hall, and Mr Small and his nursery. When I caress the bark of my small Orange Pippin, growing far from its native soil, I will think of them.
Posted by Susan at 15:10