A Waste Of Space

The week began well with the arrival of Will and Kate-our Will and Kate not the pair who recently visited India. In fact our Kate has been to India but oddly no press coverage is available.

They looked tired; being young executives in an oil town is no fun these days.

I forced them down to the beach but they are prairie kids and the pull of the sea is not in their blood. Unlike moi whose first breath inhaled sea air. They complied to humour me.

I let them have a good rest for four days and then got out the work clothes. 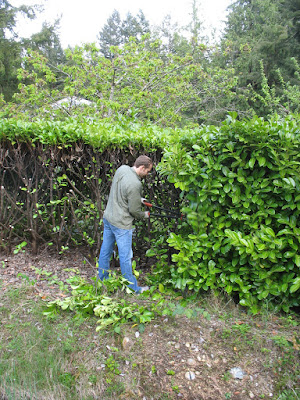 This laurel hedge bothers me, it looks out of place in a woodland garden. Laurel is next to impossible to remove without great effort and expense. Will gave it a severe pruning.

I plan to plant silver lace vine at intervals along its length and hope it swallows up the hedge; maybe some honeysuckle for good measure. I want that thing to disappear.

W and K left on Saturday. Fortunately the garden club plant sale was the following day so I had to buck up. The members out did themselves with donated plants.

This was one end of the curling club, the other walls were packed with individual growers selling their wares. 10% of their gross is donated to the club which, added to club sales, makes a tidy sum to pay for all sorts of garden related good works. I rather overdid it on purchases.

Finally, a word to the young woman in the line up outside the building. Having a full out tantrum when asked to move up, so those further back did not have to stand in the road, was unbecoming. I understand keeping your spot in the sun was far more important to you than ensuring the safety of a large number of people, trapped in the middle of the road, with traffic coming towards them around a blind corner. To then scream at the group of elderly and sweet natured people who moved up into the space you created by not moving, and calling them rude and ignorant, was quite the scene. Everyone around you had a good laugh at your expense-did you notice? Our town is small, we know where you work, your organisation relies on goodwill. I doubt any of your audience from Sunday will be popping in anytime soon.
Posted by Susan at 20:57