Getting My Groove Back 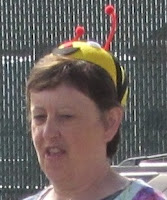 This is me in my bee hat. I wore it in front of thousands-well hundreds-we're a small town. I was part of the garden club entry in the annual parade. Our theme was -surprise-Bees.

Big news-
for the first time in three years I got to the apples before the bear. I think I've hit on a no fail deterrent. Scary eyes.

I made them from solar lights our daughter gave us several years ago. Four have survived so I wrapped them in red tissue paper and made two pairs of glow in the dark red eyes. One pair went in the orchard and one pair up in the branches of the Orange Pippin. Absolutely no sign of bear or deer visits from the time they went up.

90% of my seedlings were eaten by slugs while we were away. Slugs, slugs, slugs, I said emphatically to the lady who was house sitting. As in, hunt those suckers down and kill them. Bless her, she carried on watering the sad little stumps.

The strawberries went crazy in our long hot summer. I could hardly keep up and they are still throwing out a tasty handful for when I'm weeding. The other bumper crop was scarlet runner beans. The freezer is packed with them. In my opinion they retain their flavour and texture better than frozen bush beans. The bush beans were a disaster anyway. As were the summer beets, the heat got to them.

I half heartedly picked up four cucumber plants at the store. They went crazy. Our grandson went into the cucumber retail business. Honour stall at the gate with a jar labelled MNE.

In the garden for winter

also in but iffy
Carrots
even more iffy
Turnips

In the category of how did this happen I am now President of the Friends of the Library. It is like herding cats-fortunately the cats, in their own way, are getting things done.