Madam President and the Fundraiser

Where has the time gone? Well I'll tell you. Most of it went to raising thousands of dollars for the new library. I never expected volunteering to become a full time, might I add unpaid, job. We rented a funky old bank building in the historic town site and filled it with 150 pieces of art. Each piece was on an eight inch square piece of canvas we had handed out to professionals and amateurs at the end of August. The idea captured the imagination of our little town. 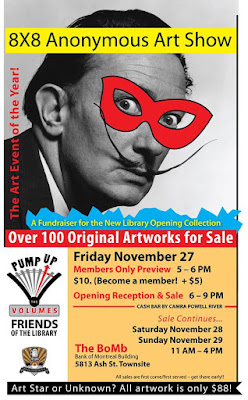 Friday night was the kick off gala. Thursday morning the owner of the building realised he had no idea how to turn on the heating. Never had to before. Turns out it used to be heated by steam from the mill when the company owned the whole town. I must say discovering the old pipes was interesting but not helpful in any way.


We thought we had been very smart and counted the electrical outlets ahead of time. Of course we weren't smart enough to actually test them.... We ended up with a lot of extension cords and power bars; the art work required good lighting. Duct tape became our best friend.

With an anxious eye on the electrical panel we plugged in an electrical heater in the area screened off for volunteers and another in the ladies washroom because, believe me, that seat was freezing.

Then we advised everyone to dress up in their best mitts and woolly hats and come on down for the party.

It went well but oh the STRESS.

When I got home I made myself a cup of tea because that's what British people do. Then I spilt half of it down myself. Mopped up and then spilt the other half on the carpet. Then I went to the bathroom and remembered the toilet was blocked and I had to wander around the house to look for the plunger because why keep it in the bathroom where one might actually need it.

Tomorrow is pack up and clean day and then it is OVER!