Lost in the Pea Forest

In a cruise control moment I emptied an entire packet of pea seeds into a bowl and inoculated the whole darn lot. I couldn't bear to waste them so each got tucked into a cell. Of course every single one of them came up. 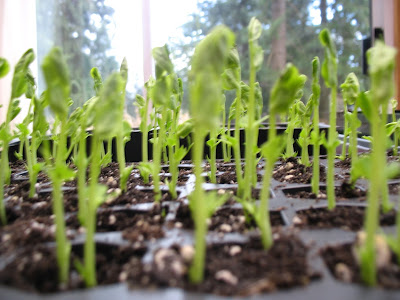 I'm trying The Pilot pea (above), and, although I don't require any more seedlings, I'm also putting in Mrs Vans', a Vancouver Island heirloom. I'll also throw in some old standards like Green Arrow or Mr Big in case the new guys under perform.

The reason I'm not at the top of my game in the seed starting dept, in my opinion, is because of the rain. The never ending freaking rain. It has poured with rain for days, weeks, months until the passage of time has become an impenetrable sheet of water.  I've begun  reacting  like a hydrophobic rabid dog to water dependent domestic tasks.

Meanwhile, while it remains wet and cold outside, in the sun room the peas are taking over.
Posted by Susan at 17:07